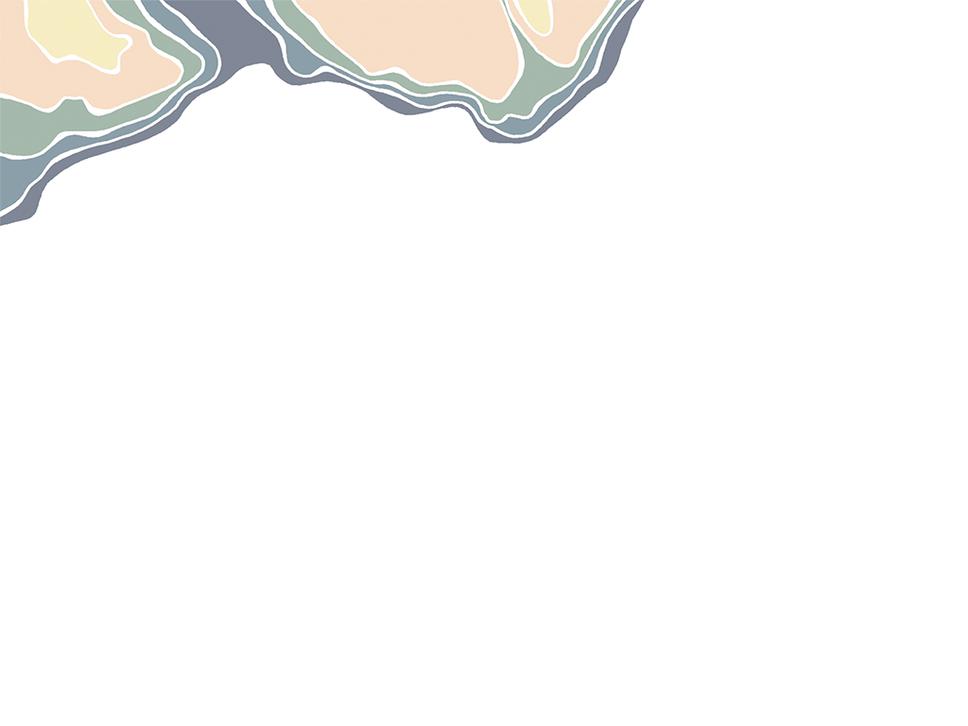 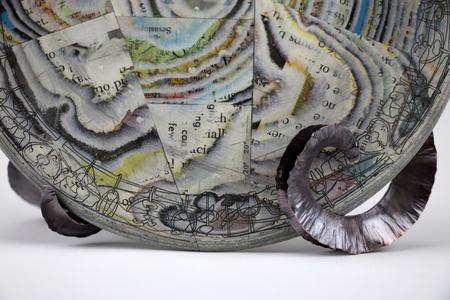 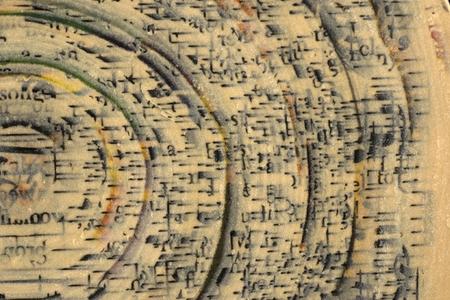 I find it useful to write short essays on topics relevant to my creative production as a means to better understand my inspirations, motivations, and decisions.  Some writings are used more formally, as part of artist statements or grant proposals, and other writings, like these here, are more personal.

MUSICAL INFLUENCE
Reflecting upon my design process, I have realized a connection to musical structures and composition.  As a former musician, my simultaneous interest in performative and visual arts has evolved over time.  Although I no longer perform, music continues to be a powerful inspiration to me.  In examining the objects I create, there is a wide variety of aesthetics, materials, and processes present. I am continually interested in how to resolve often disparate elements into a unified piece.  When considering how multiple and varied instruments are able to come together into a unified composition, I recognize parallels between musical and visual compositional approaches. I now see each visual element as a type of instrument, contributing to the overall “song” of the artwork.

To carry this metaphor further, it is interesting to know that I was a drummer and percussionist in a band with sometimes up to six other members.  When thinking specifically about a drum set, there are a wide variety of components of a drum set including different types of drums, cymbals, and other percussive instruments.  Despite this wide variety, when unified with the same rhythm, they create a harmonious sound that is part of a larger musical piece comprised of numerous other instruments.  To me, this is the exact same structure and approach I take with my visual design process.  There are numerous disparate elements that, separately, are very different but are able to be successfully united with an appropriate design approach. 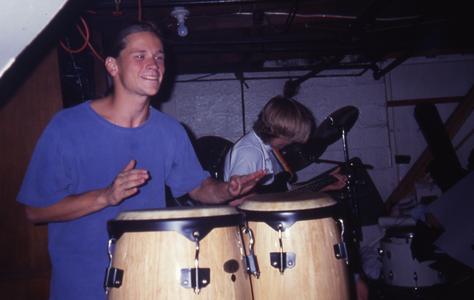 COLLAGE
Collage and bricolage have a long and rich history in the visual arts.  Since my earliest art experiences, I have been fascinated with the construction of new meaning through the juxtaposition of unexpected and sometimes even random elements.  Although not in a traditional sense, I incorporate approaches similar to collage in the design of my pieces.  My work includes a variety of materials, processes, and forms that create their own context and concepts through their inclusion in a particular piece.

With its layers of recycled paper, Thurmanite® is the most visually similar to traditional collage.  However, Thurmanite® is a bit different because it often serves as a more dimensional or structural element than typical flat collages.  When incorporating found objects, my pieces relate more directly to bricolage but since I include other elements constructed from raw materials (sheet metal, castings, wire, etc.) alongside the found objects, the aesthetic appearance of my work differs quite a bit from what would typically be considered bricolage.

Awareness of these relationships and inspirations are essential to the continual evolution of my creative body of work.  We are all part of a giant continuum of artists, designers, and makers.  The interpretation of our work is continually changing based on the context of the work and the perspective of its audience.  I strive to foster that awareness and impact of my work. 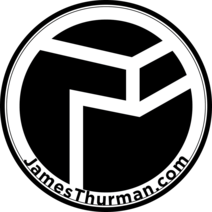 TEXT & FONTS
Throughout my artistic development, I have had an ongoing interest in the aesthetic and conceptual aspects of text.  I find it fascinating that ephemeral language can be given form through print.  Fonts and stylization of letterforms add layers of additional interpretation and aesthetics to those words.  Abstract language becomes concrete through text and can become abstract again through fragmentation and collage of those letterforms.

My earliest memory of written language is watching my mother handwrite (with a ruler, which I did not realize was relatively uncommon) and wondering why she was making drawings this way?  I was too young to understand that she was writing words and those “scribbles” had anything to do with spoken language.  When she explained to me what writing was, I was skeptical that spoken words could be made into pictures like that.

In grade school, many of my friends were first generation Americans from a variety of different countries.  Visiting their homes, I saw many different languages written in many different ways—Hebrew, Chinese, Farsi, etc.  At an early age, I realized that language, both written and spoken, simultaneously connected and divided people.  Throughout school, my doodles often took form as modified letterforms camouflaged within abstract forms with a similar aesthetic to the hidden letterforms.

My first year of my BFA at Carnegie Mellon University was a combined foundation in studio art and design.  In my 2D design studio, we worked a great deal with the formal qualities of text.  Towards the end of the course, we were given freedom to pursue our own self-generated project and I chose to continue with the abstraction of text into formal gridded arrangements.  As I pursued a studio art emphasis of my BFA, I also took design courses, including typography, which influenced the paintings I was doing at the time.  These foundational experiences continued to manifest throughout my artistic career.

During my MFA at Cranbrook Academy of Art, many of my friends in 2D Design created their own fonts.  I had never considered how digital fonts were designed and implemented.  Previously, I had just accepted existing fonts without question.  I now understood their malleability which added to my interest in letterforms.  I collaborated with a classmate and designer to create my maker’s mark, which incorporated part of the letter “T” within a circle. I continue to use this maker’s mark to sign my work to this day.  I see this logo as such an integral part of my visual identity that I had it and its reverse tattooed on my arms as a regular reminder of my personal connection to my work.

Ironically, I was introduced to metal letter stamps by a ceramic sculptor, Joseph Mannino, who I assisted in his studio for many years.  He used them as a way of including text into his large ceramic sculptures.  I responded to the physicality of forcefully stamping each individual letter into metal with a blow of a hammer.  In the years since then, I have regularly included text into my metalwork in a variety of ways, including stamping, etching, and rollprinting.

Throughout my career, I have created new fonts, both digitally as well as out of metal.  “Fauxvetica” is a font made from soldered wire, inspired by Helvetica.  I have both cast Fauxvetica so that individual letters could be incorporated into new designs and also used the originals to press into sheet metal to create other legible words.  Another Helvetica-inspired font of mine, “Toolvetica” was developed as part of an alphabet book I authored using numerous tool silhouettes to convey different metalsmithing terms and techniques.

The first use of paper in my artworks was during a collaborative project with a colleague, Chuck Cave, a printmaker and artist’s book maker.  We were commissioned to make awards for a Green Design symposium and we felt it was appropriate to make functional candlesticks from recycled books.  We used a bandsaw to cut the books into different shapes and bolted those sections together into the finished candlesticks.  Sawing through the old books felt somewhat “wrong” but at the same time, it revealed a unique texture of the printed words on all the pages—no longer legible but the sections of words took on a pattern reminiscent of DNA sequencing or some other mysterious code.  Despite being a metalsmith, I was instantly transfixed with these layers of printed pages and simply had to continue to explore their potential, both aesthetically and conceptually.

This exploration eventually led to my development of Thurmanite®, an environmentally-friendly composite made of layers of recycled paper bonded together with plant-based resins.  For more than twenty years, I have incorporated Thurmanite® into my studio work and I continue to explore its potential.  A highly versatile material, I have: lathe-turned it, laser-etched it, CNC machined it, threaded it with hardware, set it like a precious stone, the list goes on and on.

I see so much potential in the use of text because both text and artworks are forms of coded information in a dialog.  Text is tied to its language used by either its speaker or author.  Artworks are both a conceptual and aesthetic dialog between its creator and its audience.  Both of them are “read”: literally or aesthetically.  Both of them bring form to the ephemeral and create a lasting embodiment of ideas. 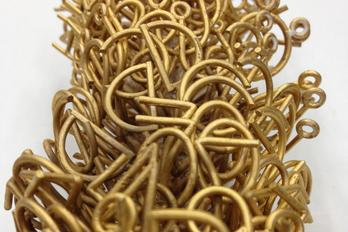 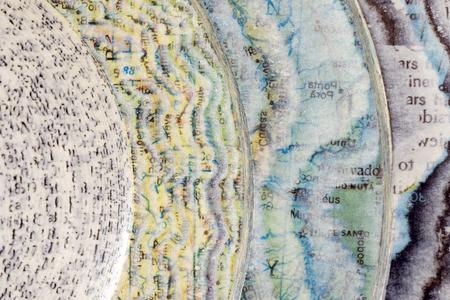 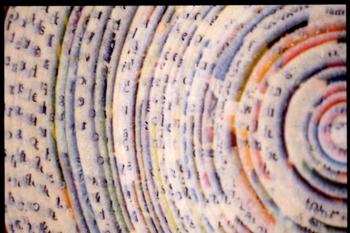